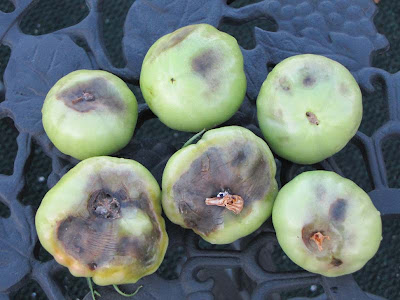 Some of the celebrity tomatoes had blossom end rot so I plucked them off.


Symptoms may occur at any stage in the development of the fruit, but, most commonly, are first seen when the fruit is one-third to one-half full size. As the name of the disease implies, symptoms appear only at the blossom end of the fruit. Initially a small, water-soaked spot appears, which enlarges and darkens rapidly as the fruits develop.

Large lesions soon dry out and become flattened, black, and leathery in appearance and texture.

Since it is of a physiological nature, fungicides and insecticides are useless as control measures. The occurrence of the disease is dependent upon a number of environmental conditions, especially those that affect the supply of water and calcium in the developing fruits.

The disease is especially prevalent when rapidly growing, succulent plants are exposed suddenly to a period of drought. When the roots fail to obtain sufficient water and calcium to be transported up to the rapidly developing fruits, the latter become rotted on their basal ends.

For the past couple of weeks I've been able to get away with filling their 4 gallon tank every other day, obviously that is no longer the case. These are some thirsty plants! Now, when I get home at the end of the day, there's barely an inch of water left in their reservoir. I miss the rainy days of June when I had to water only once or twice a week.