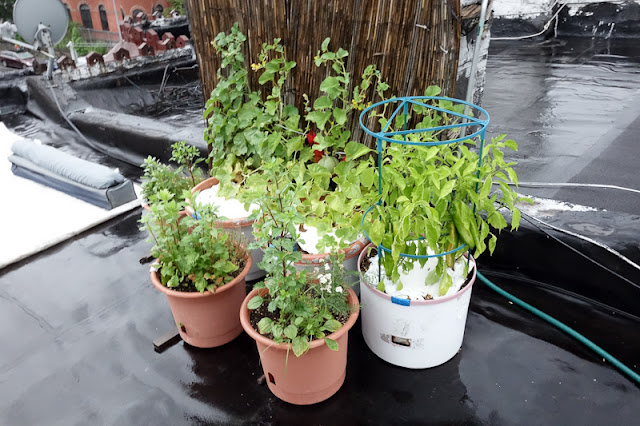 Well, the good times had to end at some point. Last week's heatwave did no favors for the garden. Very high daytime and nighttime temperatures meant practically no pollinating or fruiting for the week, so reduced yield down the line. Prolonged hot weather also leaves plants weakened, making them more vulnerable to disease, which is unfortunately the case for one section of the rooftop garden. 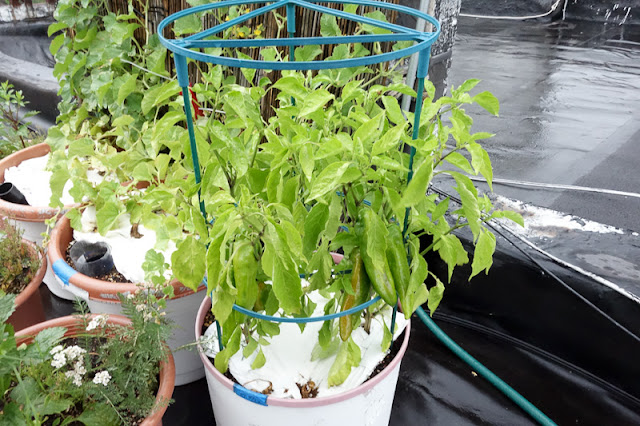 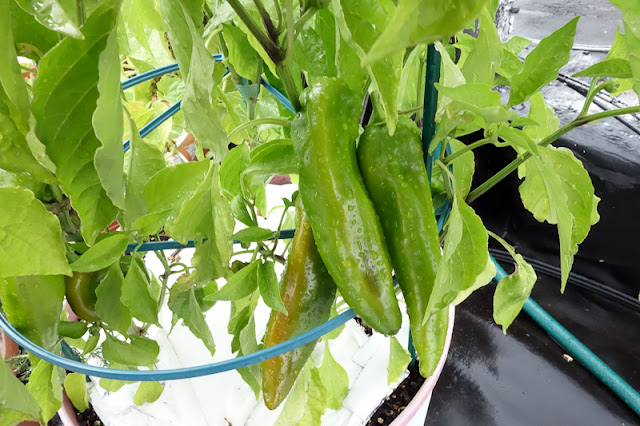 Fruiting has resumed now that the weather has cooled. 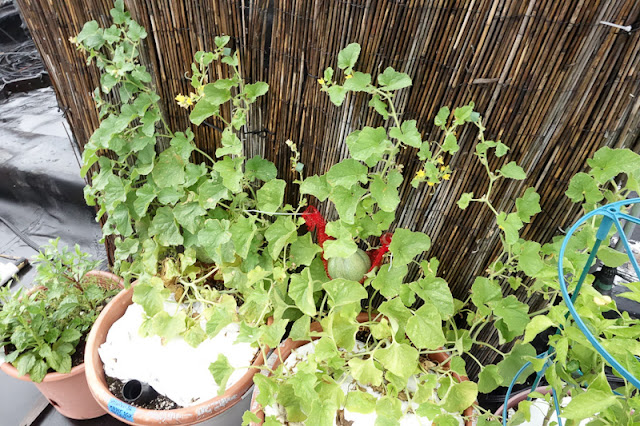 Hot and dry weather is also perfect for spider mites, which have made their home on the Minnesota Midget melon plants. I've been regularly hosing down the leaves to keep their numbers in check. 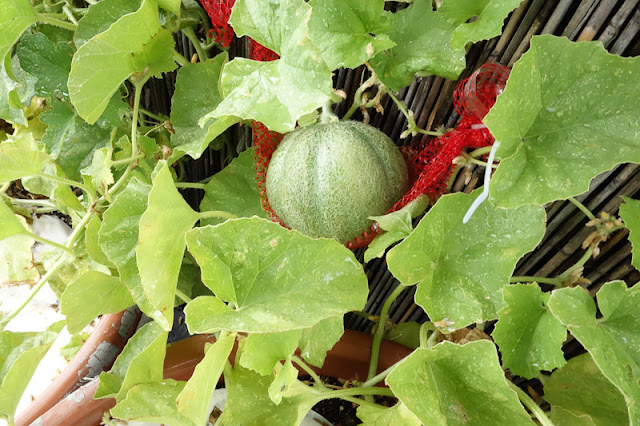 I thought I saw a few more melons growing, but there has been no advancement in size, so they are staying off the tally. 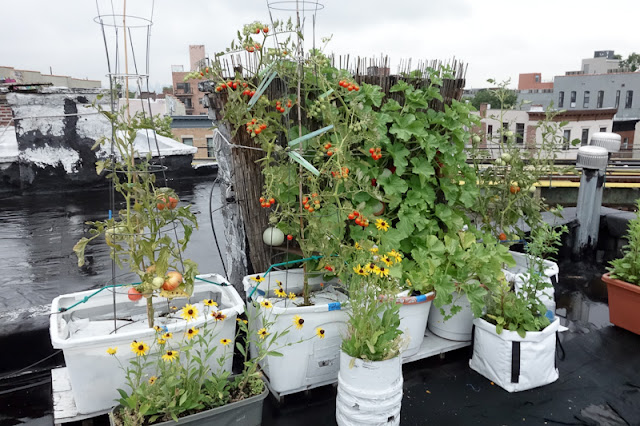 All the tomato plants on this section of the roof show signs of fungal disease, so they were all aggressively trimmed and then sprayed with Actinovate. Some kind of blight or wilt has affected the plants, I haven't kept the affected foliage on the plants long enough to figure out the specific culprit. I sincerely hope the disease does not travel to the other tomato plants on the roof. The other 2 plants, Beaver Lodge and Cosmonaut Volkov, are both open pollinated varieties that have practically zero disease resistance so if disease takes hold it will be very hard to control.

To reduce the chances of spreading disease every garden maintenance trip requires several hand and tool washings. All trimmed foliage is immediately bagged and trashed. I used to change into my garden outfit, tan long sleeved shirt and green cargo pants, every time I had to putter around the garden, but now I just keep on my regular clothes to do garden stuff and them put those clothes into the hamper when done. Less chance of spreading the disease from one day to the next.

I wouldn't worry so much if it was later in the season, but I have yet to harvest practically anything from either plant so I feel my paranoia about disease transmission is appropriate. In the future I think I'll limit the tomato varieties to one plant per section. Physical distance seems to be an effective form of disease control. 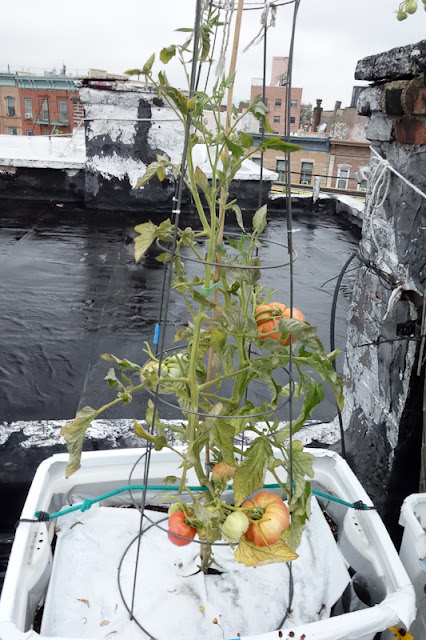 Brandy Boy F1 tomato. I originally thought the yellowing of the lower leaves was due to aging, but its proximity to the Jasper tomato plant made me think twice. Dead blossoms were also trimmed off because some had what looked white, spore-like spots. I tried to take a photo, but it was too windy to keep a blossom absolutely still for a closeup shot. 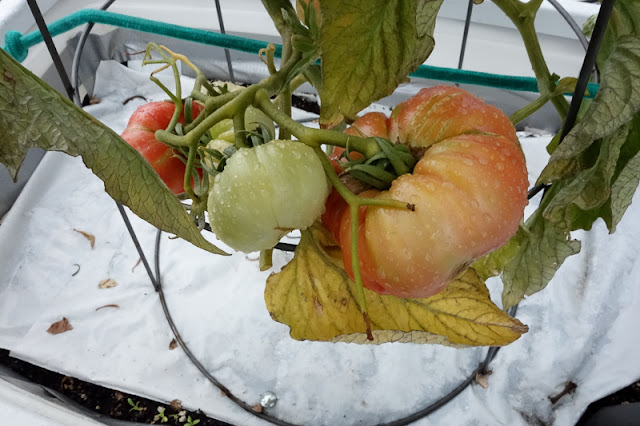 I sincerely doubt I'll get any more fruit out of this plant so once the current crop turns red this plant is coming out. Which is a shame since these are by far the largest tomatoes I've ever grown on the roof, I'm looking forward to weighing them once they're ready to harvest. 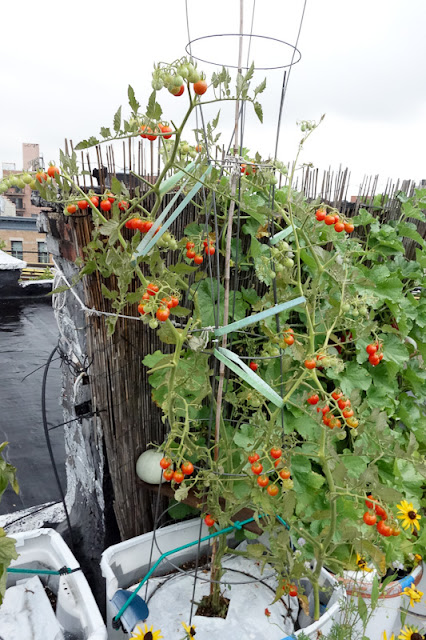 Jasper F1 cherry tomato. The plant looks good now, but that's only because I trimmed off all of the yellow leaves, almost the entire lower half of the plant. Last week I wasn't sure if the yellowing was due to aging or disease, but the speed at which the leaves yellowed convinced me disease was at play, so the leaves were trimmed and organic fungicide was sprayed. 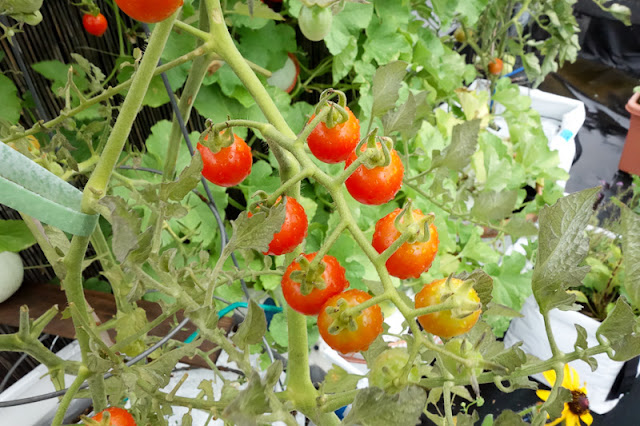 Even though the plant has been hit by disease I'm still very impressed with it's performance. There are tons of flavorful cherries waiting to be eaten. 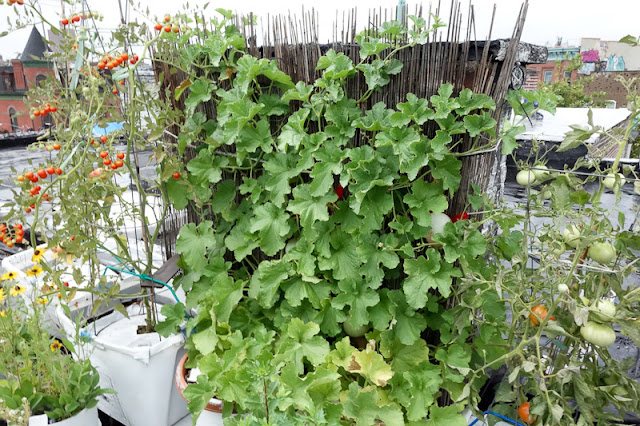 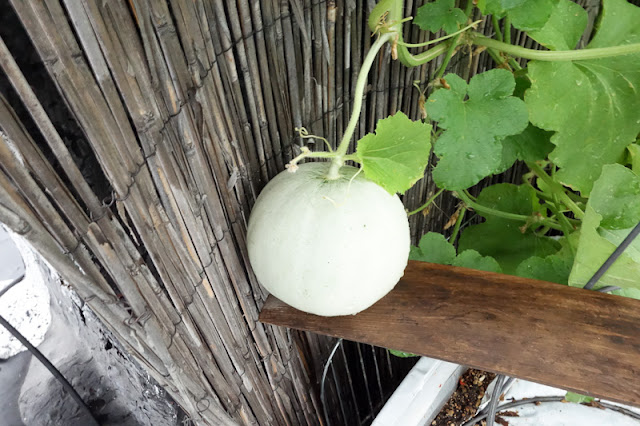 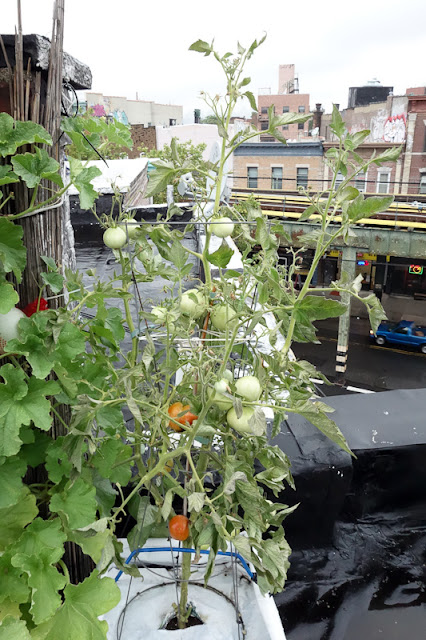 Japanese Black Trifele tomato plant was also trimmed and sprayed. This is an open pollinated variety that has zero disease resistance. I'm crossing my fingers that the current batch will ripen before disease completely overtakes the plant. 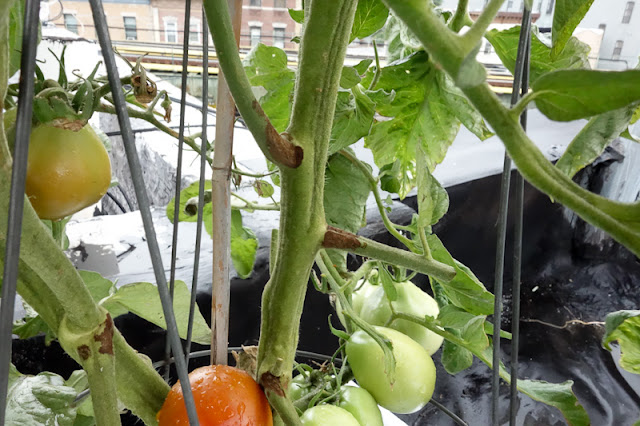 Brown lesions on the stem are never a good sign. 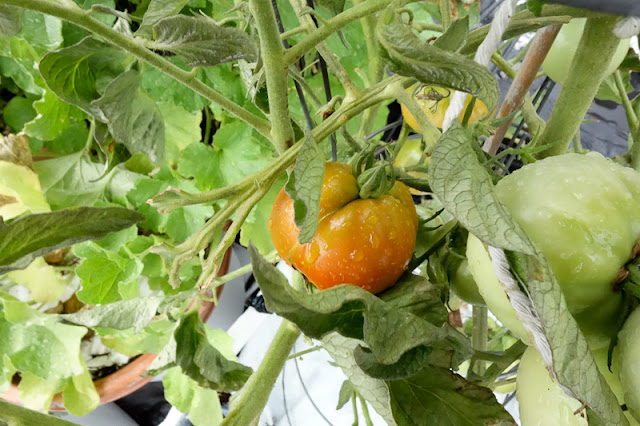 Some the fruits look like they've been pollinated by a different tomato plant. They don't have the distinctive pear shape seen in many Japanese Black Trifele photos. All the more reason the keep tomato plants separate in future garden plans. 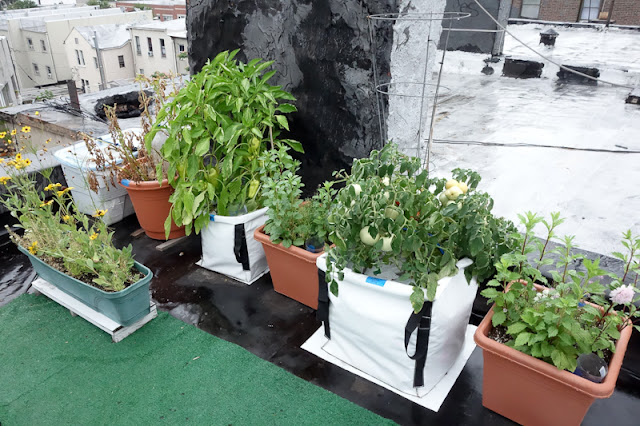 This side of the roof is doing very well. 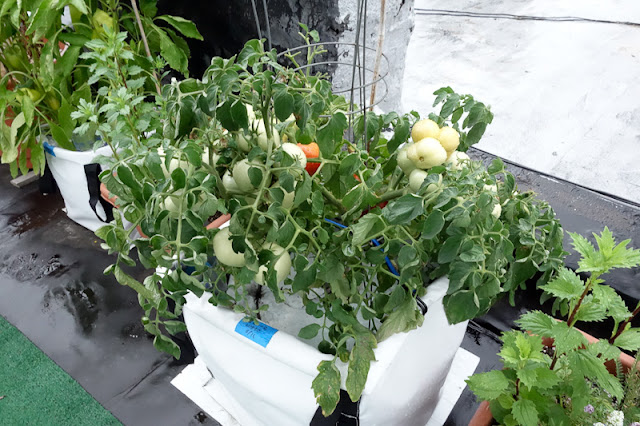 The Beaver Lodge tomato is still a very healthy plant. I hope it stays that way! 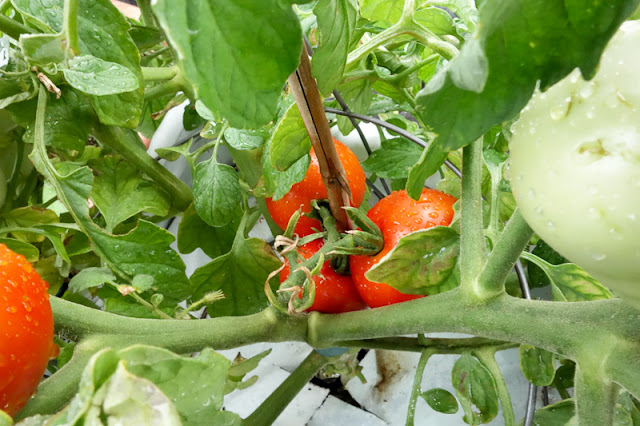 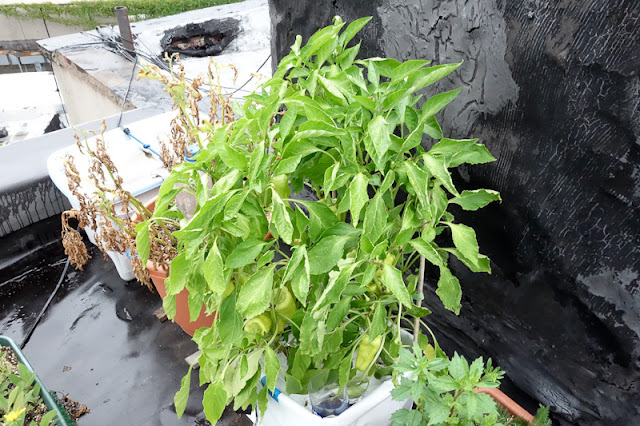 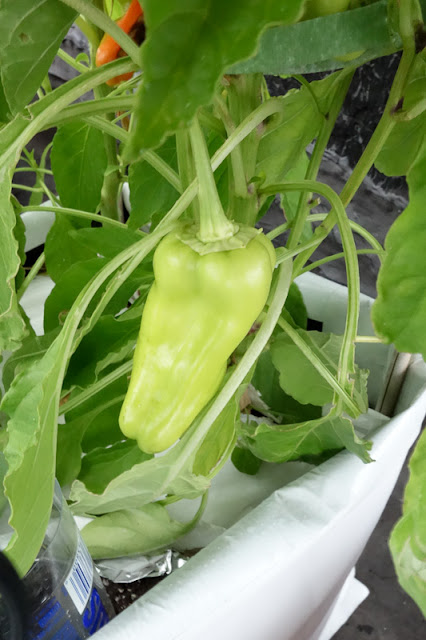 The fruits are smaller than last year's crop, but the plants are growing in a smaller container so the size difference is not surprising. 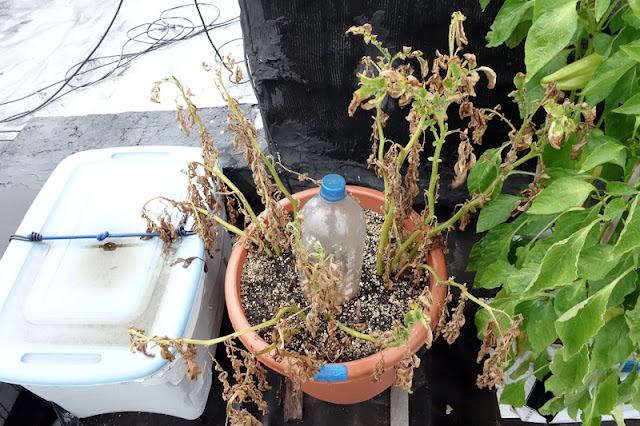 I think I'll harvest the Yukon Gold potatoes this weekend. 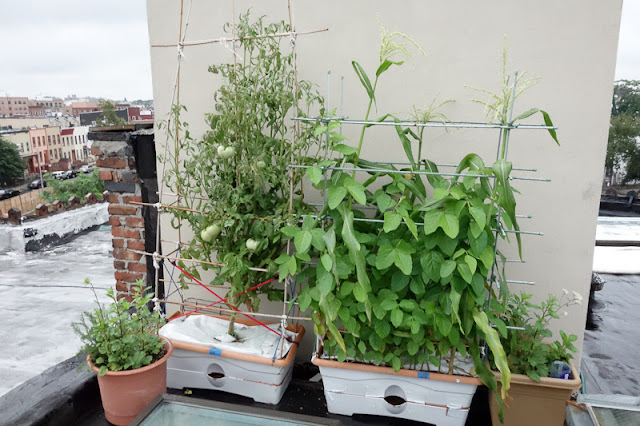 This section of the roof is also doing very well. 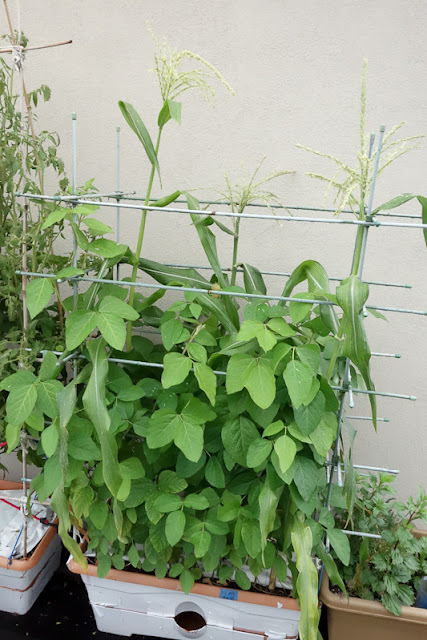 On Deck F1 corn and Butterbean soybeans. 2 more corn tassels and 1 more corn ear have appeared. Flowers have appeared on the soybeans so the pods should soon follow. 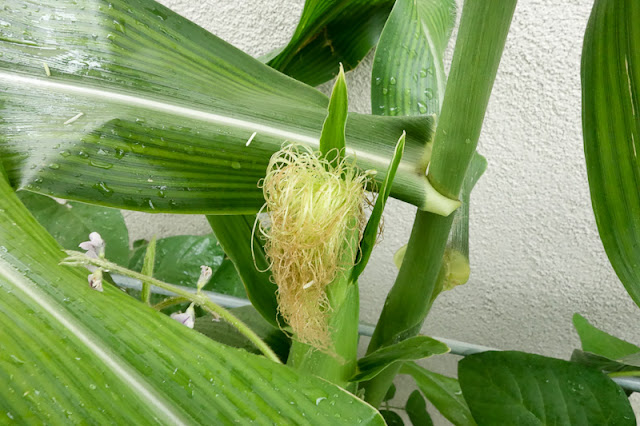 The silk on the first ear of corn is turning brown, which I've read is a sign of successful pollination. I hope this is the case, but since last week's temperatures were so high for so long (corn pollen is not viable above the mid 90's)  I'm not feeling too confident about this particular ear of corn. I'm very eager to peel back the husk to find out. 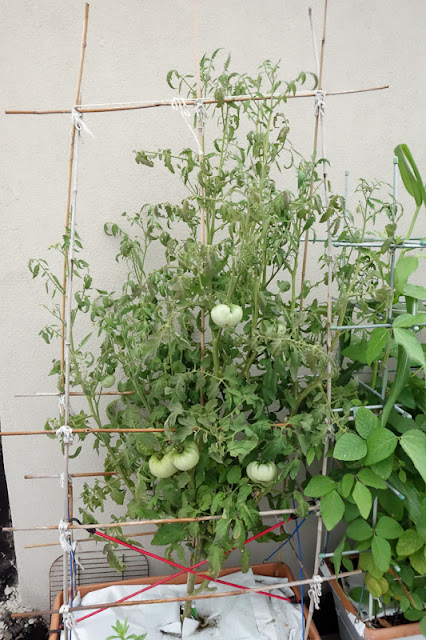 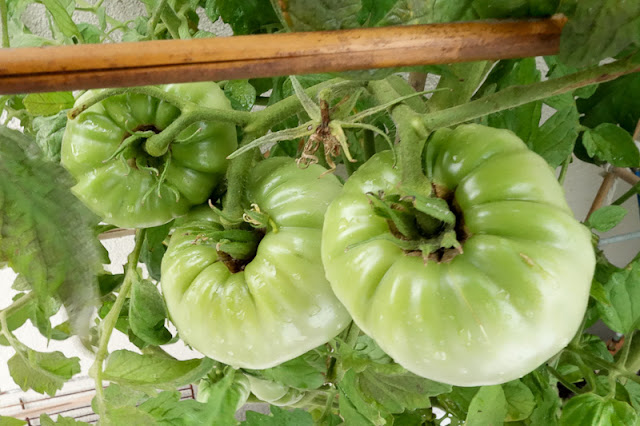