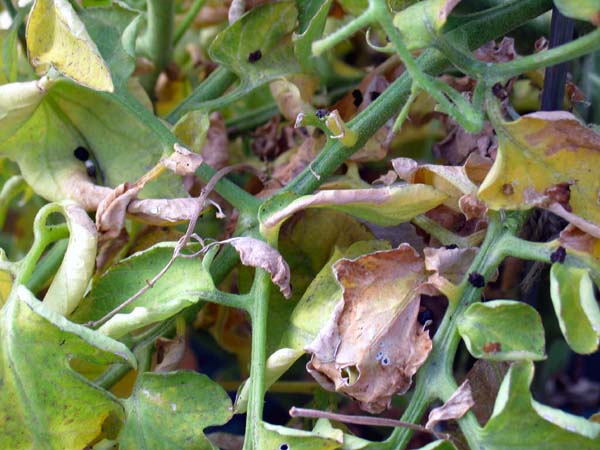 Gross. Not only is my roma suffering from wilt I now have to look for the hornworm caterpillar that's been leaving its poop on the plant. I actually saw the caterpilllar a couple days ago, but at that time I didn't know they were harmful to plants so I just cringed and turned away. Today, after I saw the damage to the leaves and fruit and noticed the nearby black particles, I used the google and discovered the culprit.


Gardeners are likely to spot the large areas of damage at the top of a plant before they see the culprit. Hornworms are often difficult to see because of their protective coloring. Not much for the heat of direct sunlight, they tend to feed on the interior of the plant during the day and are more easily spotted when they move to the outside of the plant at dawn and dusk

The presence of the hornworm may also be noticed because of the large, black droppings (frass) that accumulate on the ground beneath the affected plants.

I have a slightly paralyzing fear of insects so seeking it out and pulling it off should be some fine mental torture to look forward to. What's grosser the necrotic lesions of sunscald or caterpillars?