Cracks in the Calm Facade 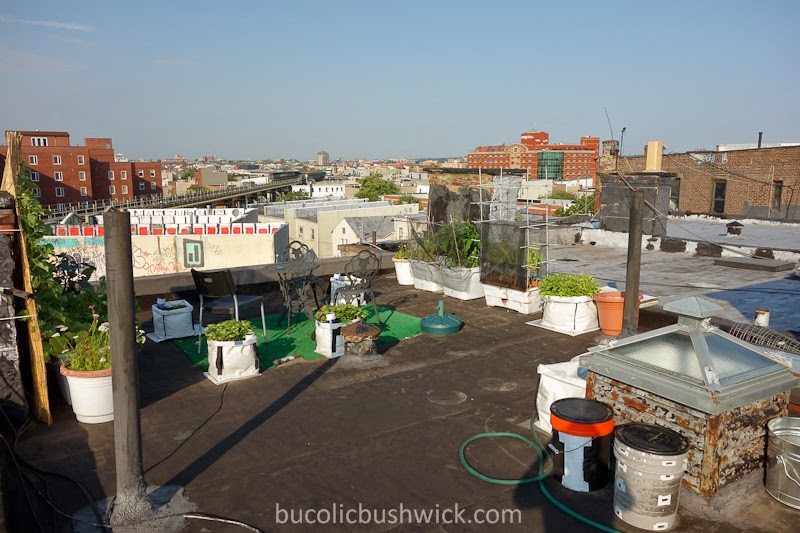 The long weekend allowed me to take a break from the garden and return to it with fresh eyes. 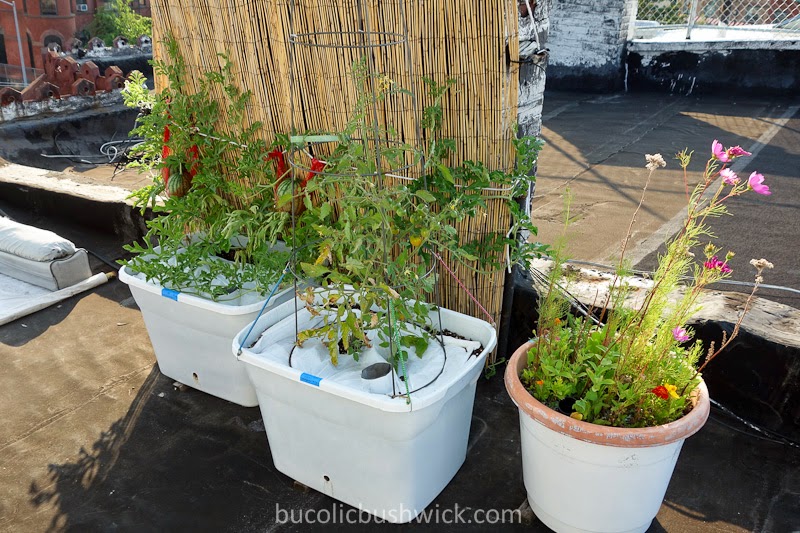 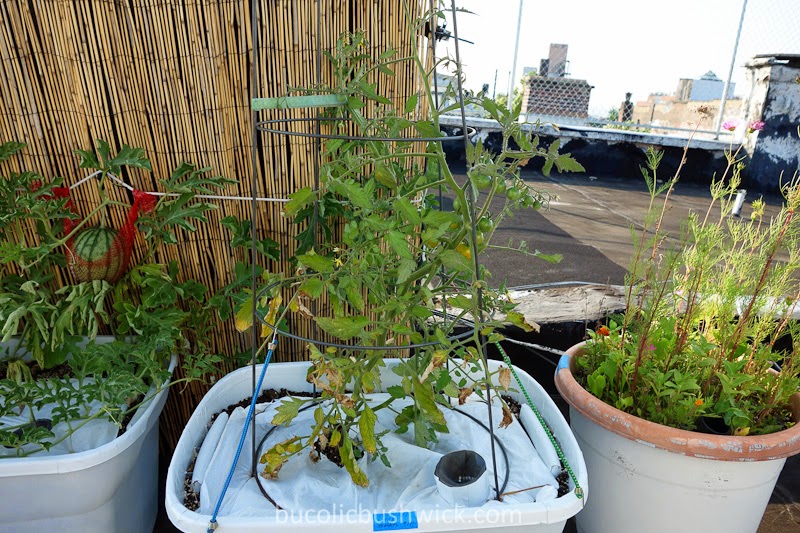 Sunsugar F1 cherry tomato. I'm not sure if this variety likes being on the roof. This is an indeterminate type, so it should get fairly tall, but it's not. Usually by this time of year indeterminates reach the tops of their cages, this one has just reached the 3rd rung of its cage. 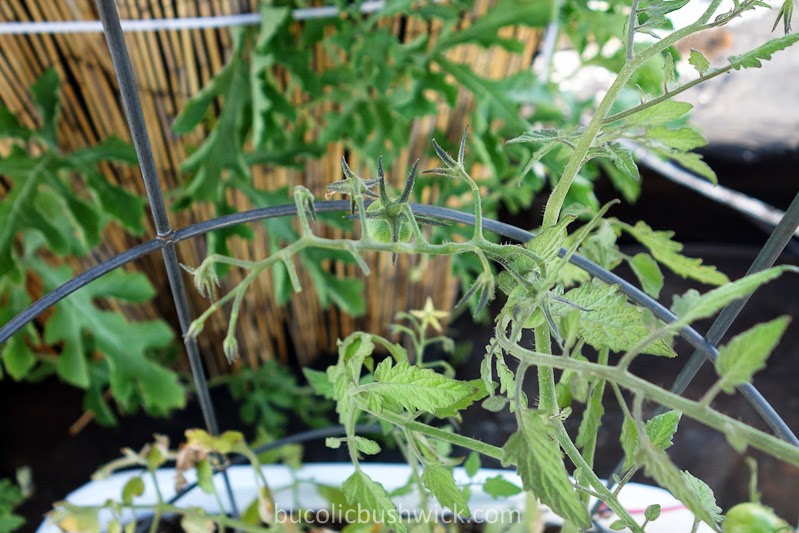 It's also been dropping blossoms. I don't think it's due to too much sun since it's in a shaded location, or due to heat since it hasn't been that hot lately. I don't see any signs of disease or pests so this leads me to think it just doesn't like all the wind. I'll add some wind breaks to see if that helps. If not, oh well, I'll chalk it up to a poor fit for the roof and try another kind next year. 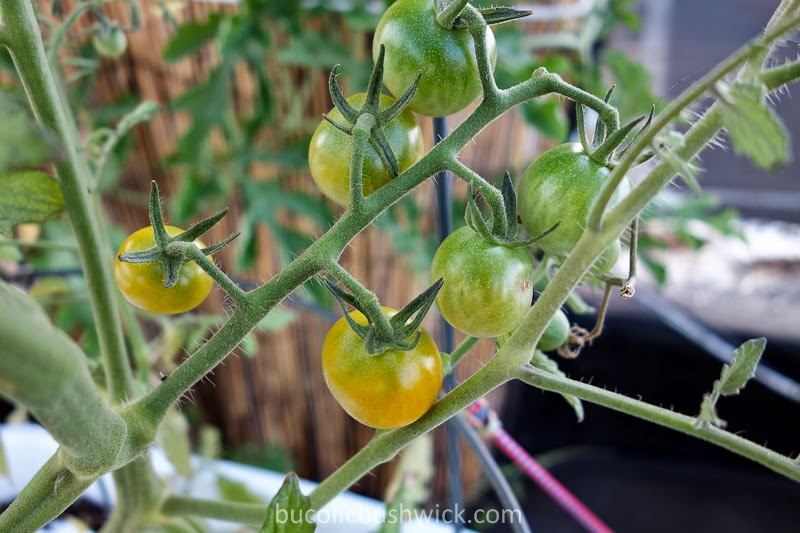 It's not all bad though. It looks like I'll be snacking on cherry tomatoes by this weekend! 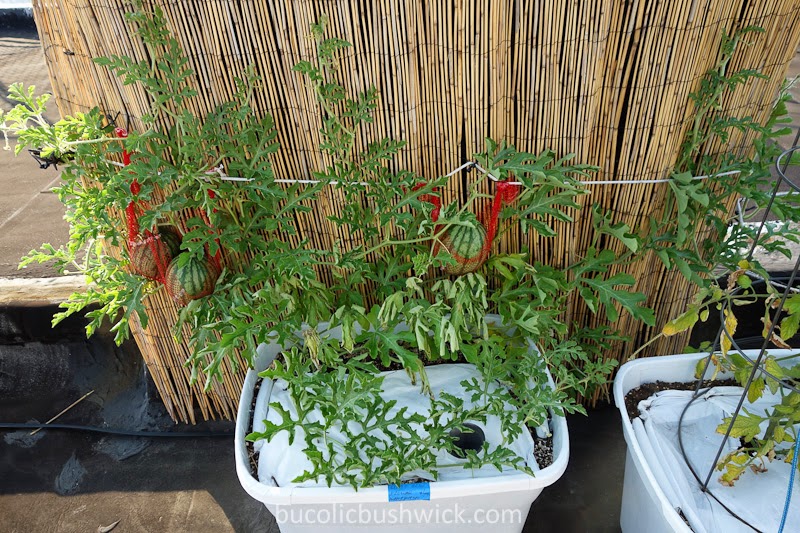 Little Baby Flower F1 watermelons.  Notice the wilting and curled leaves. I've read it's common for watermelon plants to wilt mid afternoon, but this photo was taken around 6:30pm, after the plants were sitting in the shade for several hours. This is the first time I've seen wilted leaves so late in the day. The water reservoir was filled the day before so it's not water stress. I think as the watermelons grow larger the plants are struggling to maintain themselves.

No more fruit has set, which means the plants have reached their maximum capacity in terms of how many fruit they can support. I'd like to cut down whatever plant is not supporting fruit, to reduce the demands on the water and nutrients in the container, but the vines are so intertwined I can't tell which plants correspond with what fruit, so I'm leaving them alone. In the future I would plant just 1 or 2 watermelon plants, 3 is too much for this pot size to handle.

Or maybe I should skip watermelons altogether and stick with cantaloupes and the like. As these fruits grow larger they're putting a lot of pressure on the reed fence. I'm waiting to come back one day to a split fence. 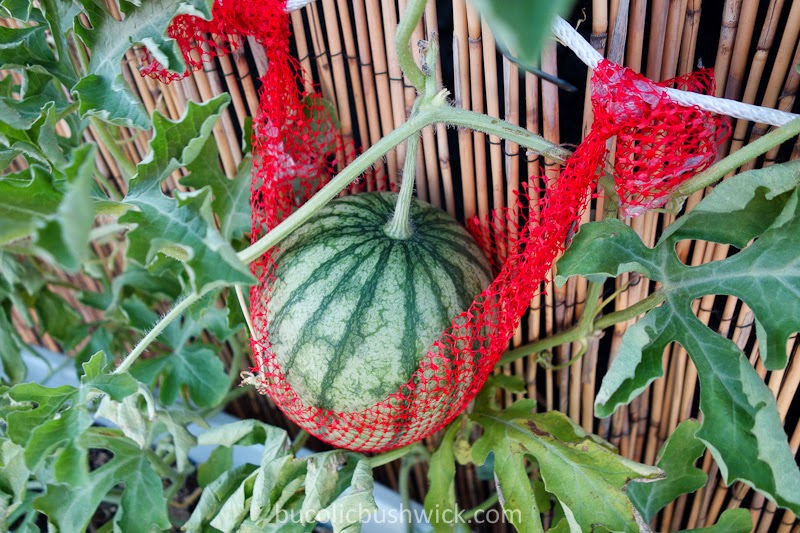 It takes 70 days for this variety to ripen so these fruits should be ready by next week or the week after.

Watermelons tend to produce their fruit all at once so instead of waiting for a possible second, smaller crop I think I'll remove the plants after the melons ripen and move the corn container over here for some much needed shelter. 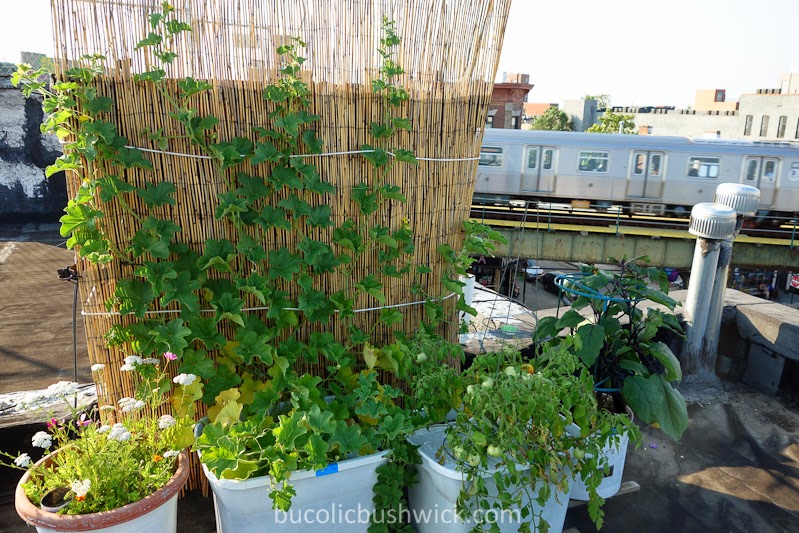 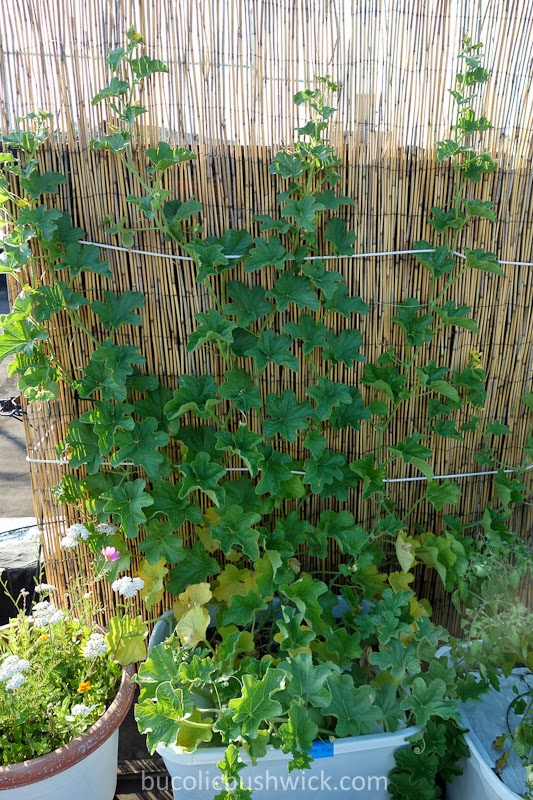 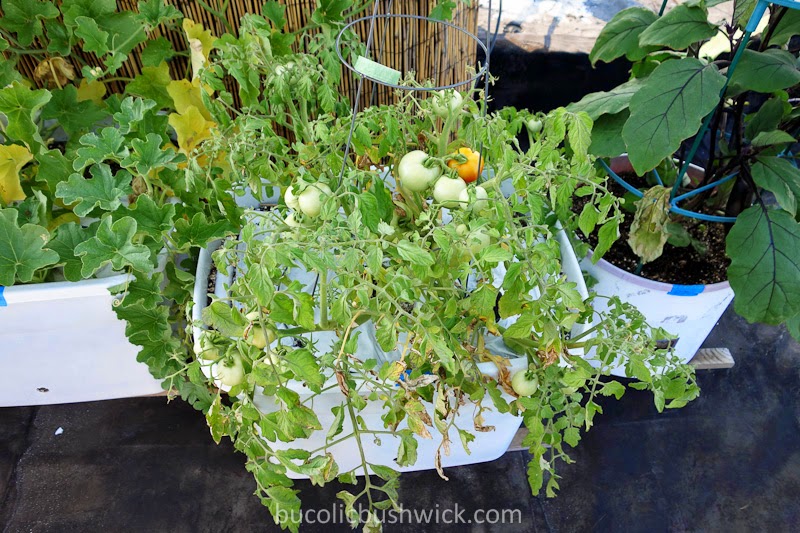 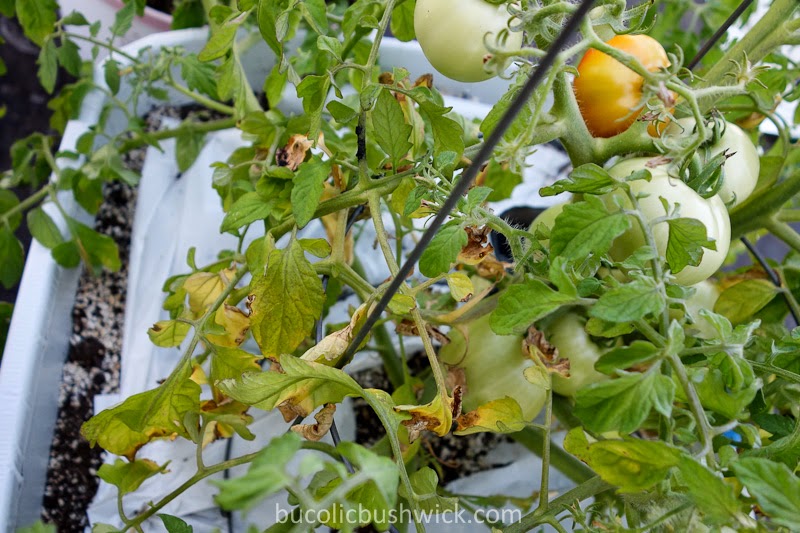 Some of the yellow leaves look a little suspicious to me, something other than age or wear and tear, so I sprayed the plant with Actinovate, an organic fungicide, to keep whatever it is in check, and trimmed off the suspect foliage. Beaverlodge is an open pollinated variety with little or no disease resistance so any hint of disease should be dealt with immediately. 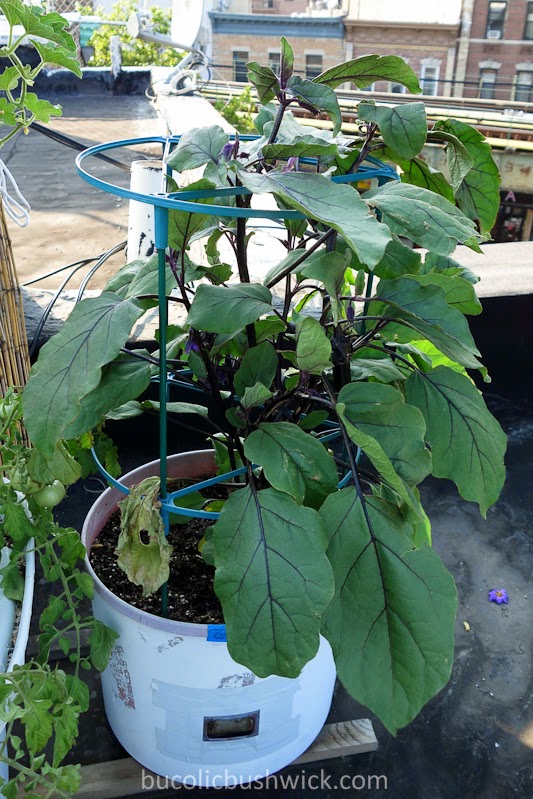 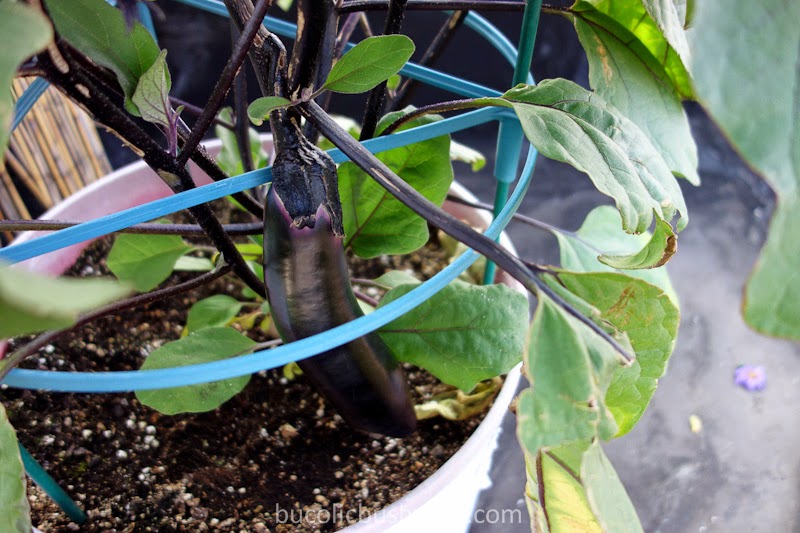 The first of many eggplants to be eaten this season. 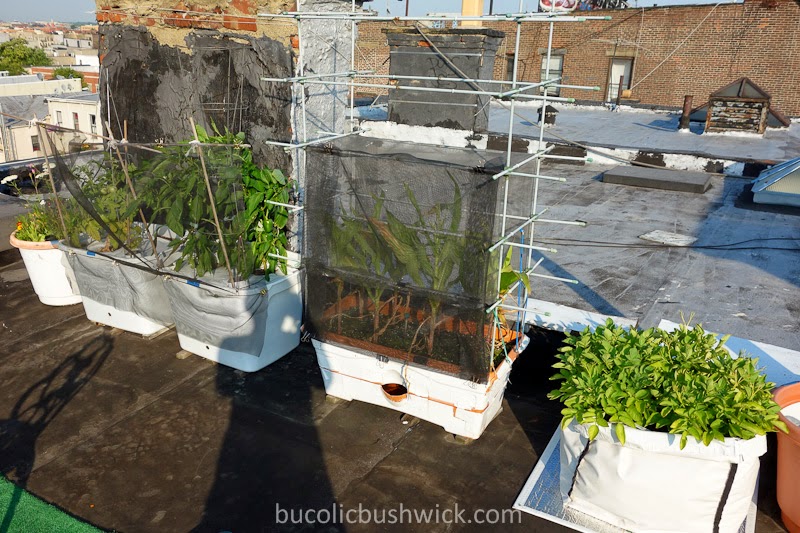 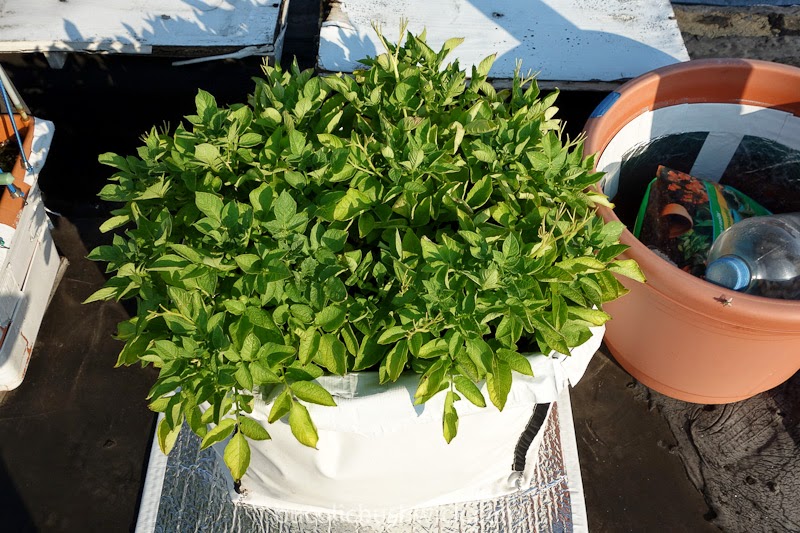 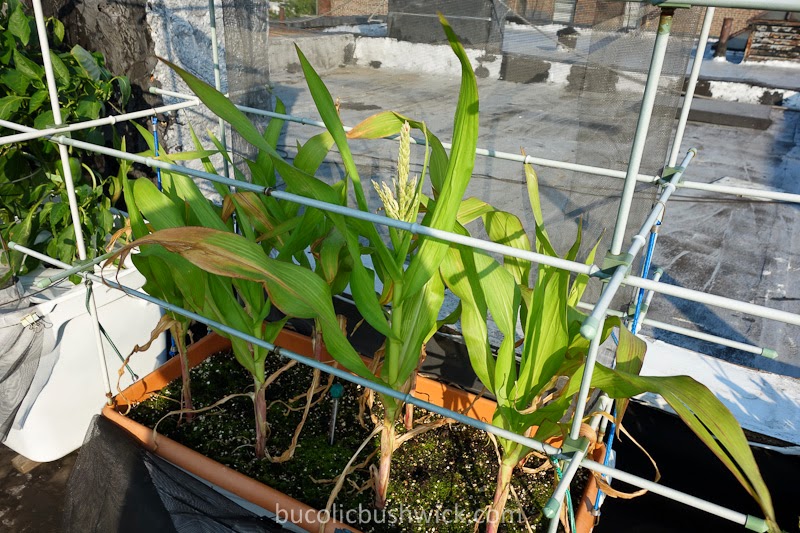 Sugar Buns F1 corn. I'm slowly losing confidence in a successful corn harvest. Some of the stalks have started tasseling while still being very short. Will there be any pollen left when the ears appear? Will any ears appear at all? These stalks don't look that much taller than last week. I'll continue my hand-wringing and hope for the best. 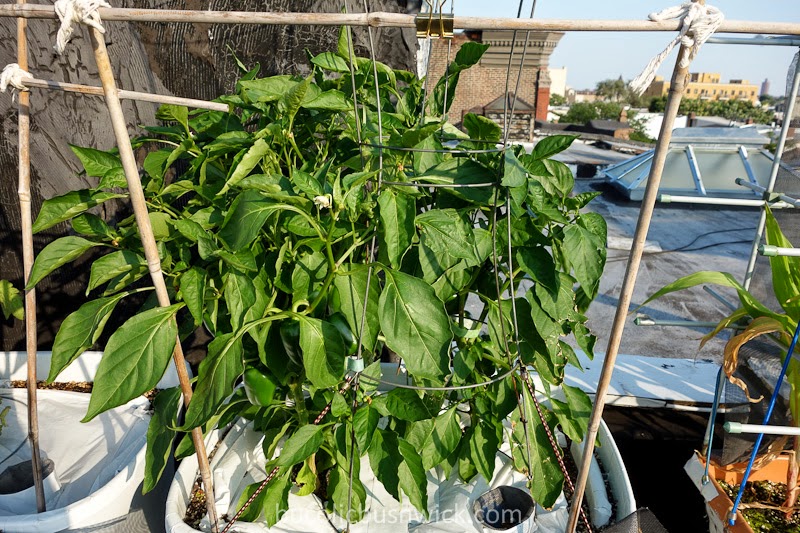 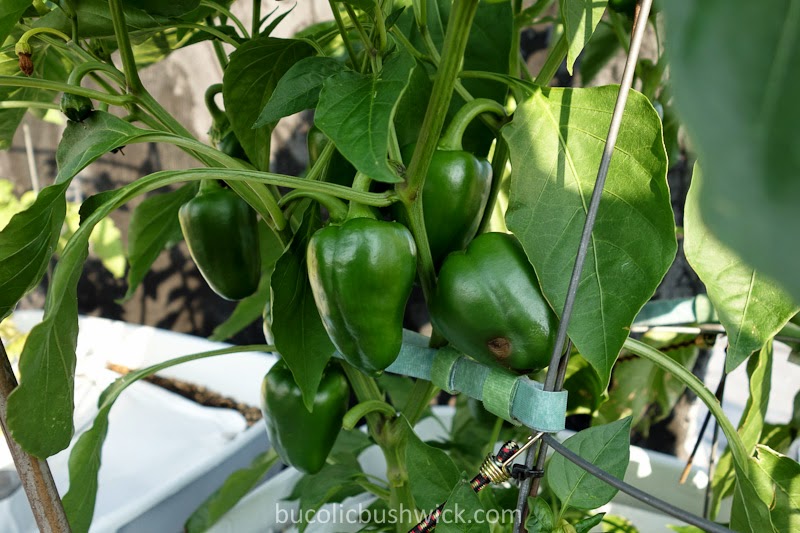 I spotted a few more peppers with sunscald so I doubled the shade fabric to block more afternoon light. 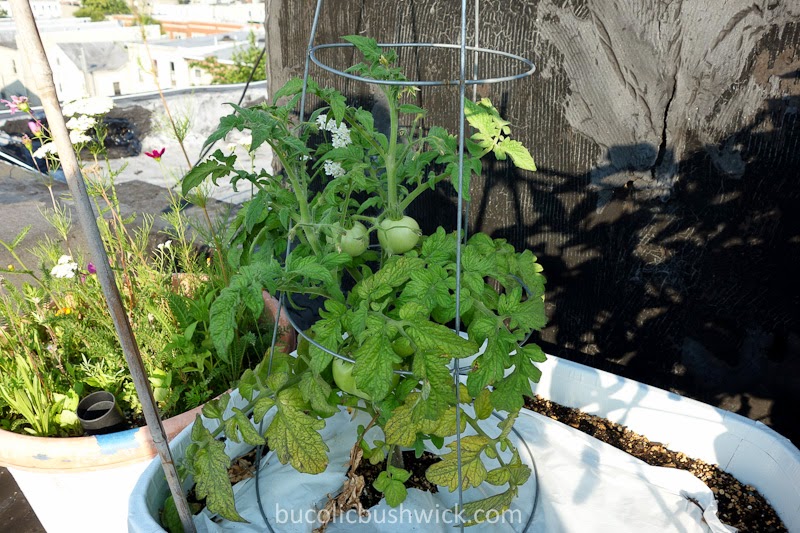 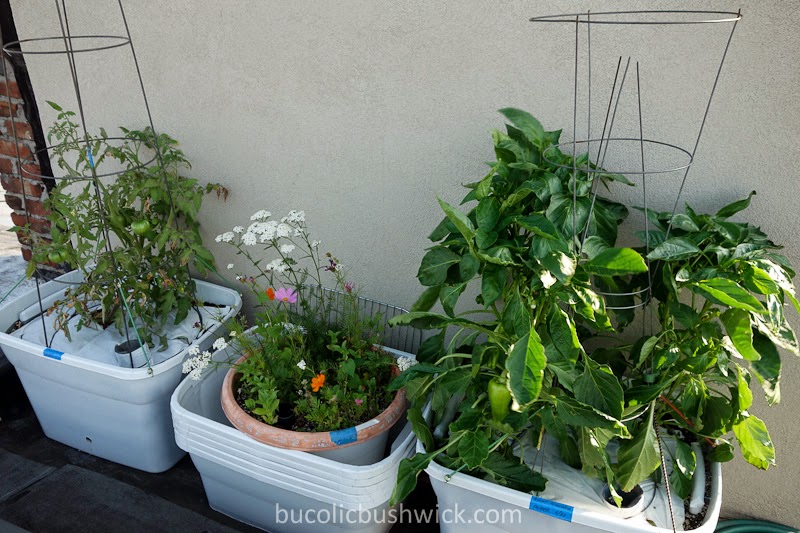 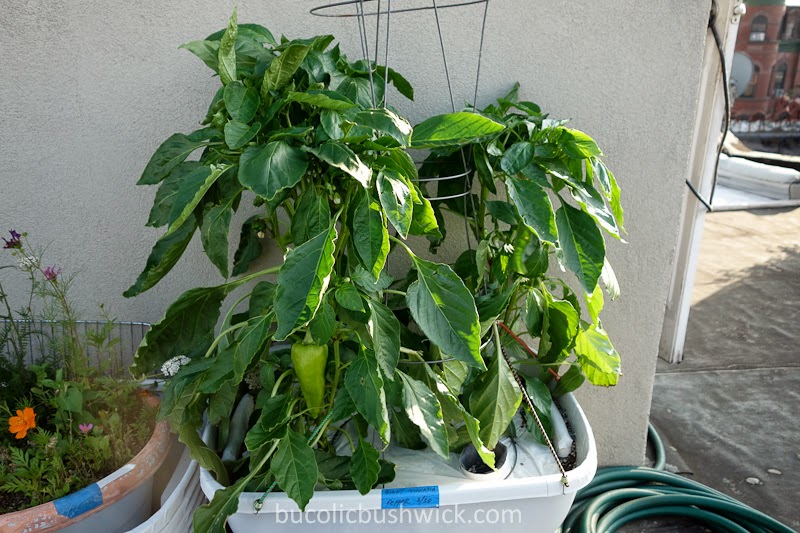 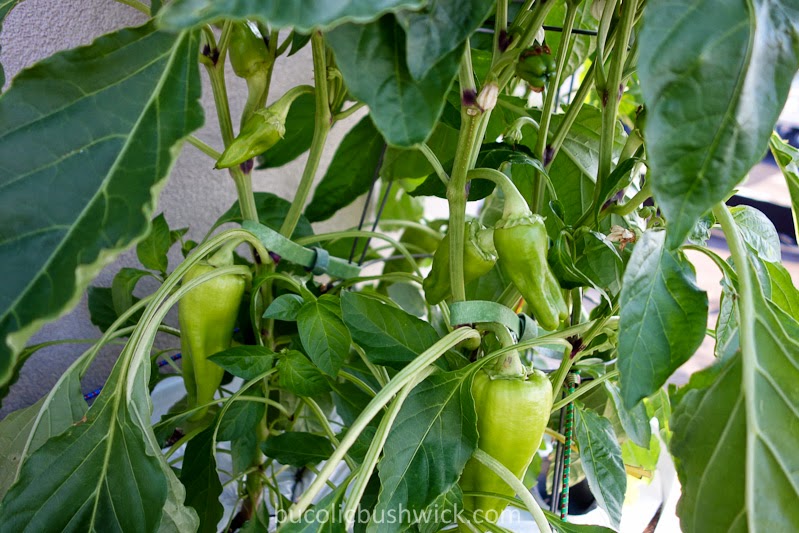 Maybe I should become a pepper farmer, I rarely have any problems growing them on the roof. 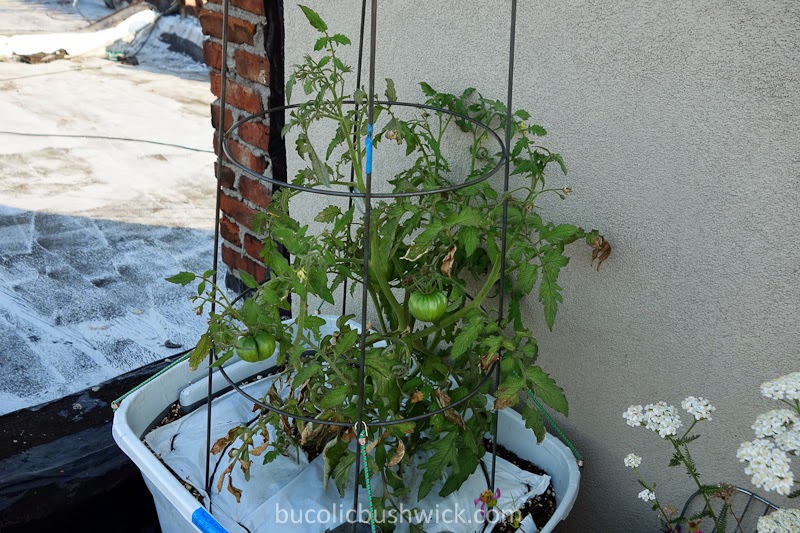 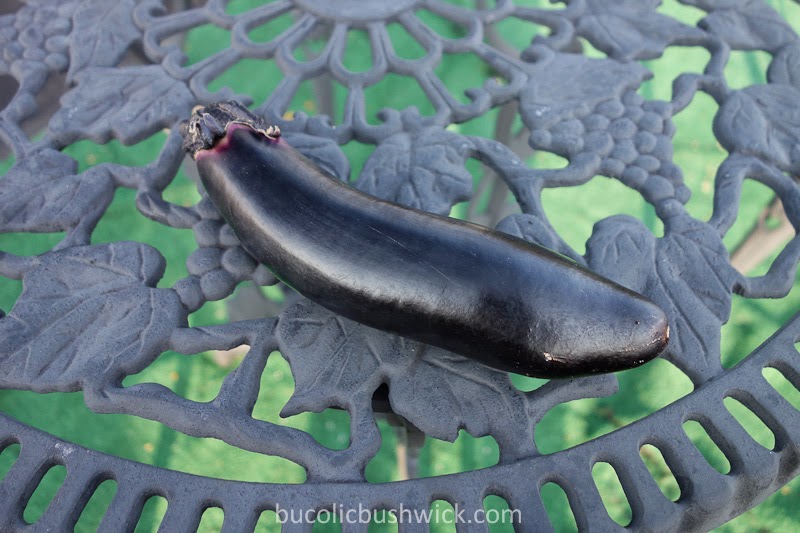