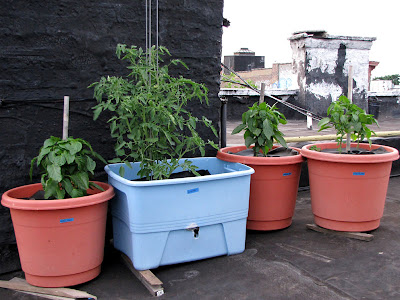 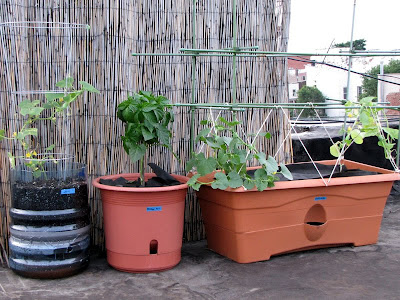 So most of the vegetable plants have been in the rooftop containers for about 3 weeks (the cucumber has been in for about 1 week).  Everything is doing very well, there's no sign of disease or pests.  Older leaves, the ones that grew while they were sheltered inside the apartment, look rather feeble and wind battered, but the new garden growth is much more sturdier to the elements.

Even the cantaloupe plants, which were what I was most worried about, are fine.  When I transplanted one of the cantaloupe plants I wasn't as careful as I should have been and, as a result, ended up splitting open part of the stem.  I didn't think it would survive, but it's adapted quite well.  There's new growth both under and over the split. 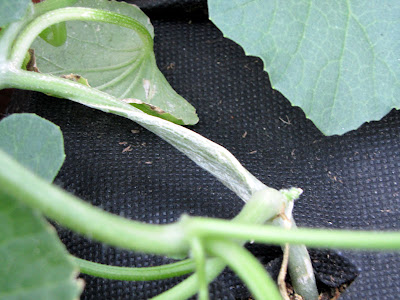 I noticed that of the 2 tomato plants sharing the GrowBox self-watering container, one of them looks bushier than the other.  My concern is that if they continue to grow in an uneven fashion the larger plant will out-compete the smaller plant for resources and I'll have another case of blossom end rot on my hands. I think the uneven growth is due to one the plants getting a few more hours of sun than the other so to remedy this situation I moved the container to a different spot on the rooftop where they'll both get equal amounts of light. 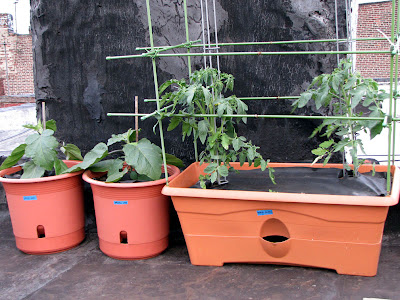