Reading Round Up: End of June Edition 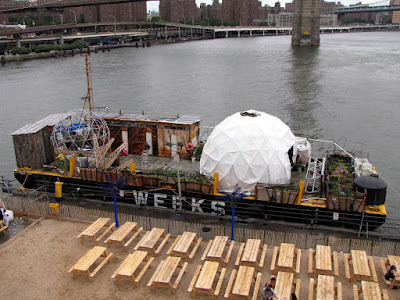 I couldn't find anything in the news media that I wanted to share so here are some posts from some fellow garden bloggers that I particularly enjoyed.

The Cheap Vegetable Gardener gets rid of aphids on pepper plants. 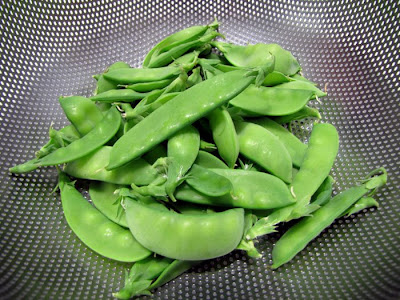 The first harvest from my rooftop container garden was an underwhelming 5.6 ounces of snow peas. They were very good, but I'm not sure if I personally like them enough to continue growing them. Something to think about.

Anyway, last year I decided I was going to record what my garden produces and compare it to what I would pay for the equivalent amount if I bought it at the Union Square Greenmarket. My hope is that the market value of the total harvest will exceed the total money spent, which right now is $201.90. Do you think I'll be able to make back all my money? Even if I don't it won't stop me from gardening! 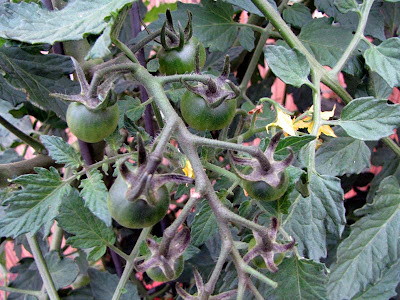 Now that the tomato plants are fruiting it's important to prune them so that they focus more of their energy on fruit production and less on leaf growth. Finegardening.com has an excellent guide.

I'm growing 2 types of tomatoes and each requires different pruning measures. Pruning tomatoes I've discovered is all about managing the suckers.


As a tomato grows, side shoots, or suckers, form in the crotches, or axils, between the leaves and the main stem. If left alone, these suckers will grow just like the main stem, producing flowers and fruit.

The celebrity is a determinate so it will need very little pruning.

The orange paruche cherry tomato is semi-determinate so only a few of its suckers will be allowed to stay, the rest must be pulled off.


Semi-determinate plants, as the name implies, are somewhere between these two other types. I think semi-determinates are best grown to three or four stems

The author writes celebrity tomatoes are semi-determinate, but the seed company I ordered from states they are determinate so I'm going to defer to their experience with their seed. This also has the added benefit of less work for me!

Reading Round Up: Little Tokyo Edition 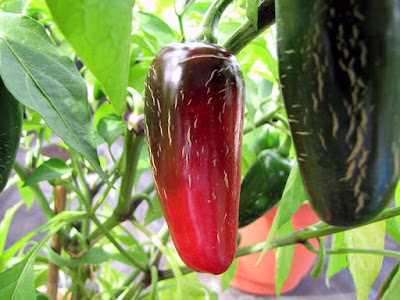 For a Green Thumb, Just Add Water from the Wall Street Journal covers some of the new garden products geared toward gardening newcomers. I find Home Depot's "Farm in a Box" incredibly intriguing. Hopefully they'll display it in a nearby store so I can check it out.

The Baltimore Sun in Maryland tells us what to do in the garden after a heavy rain.

In response to a budget shortfall a community in Minnesota asks its residents to adopt some of its municipal flower beds. Wayzata residents pick up gardening duties at city parks from the Star Tribune, Minnesota. I love this idea. I don't know if I could take on the responsibility of a large flower bed, but New York has tons of security bollards disguised as massive concrete planters. If the city ever offered some of those for adoption I would sign up in a heartbeat. 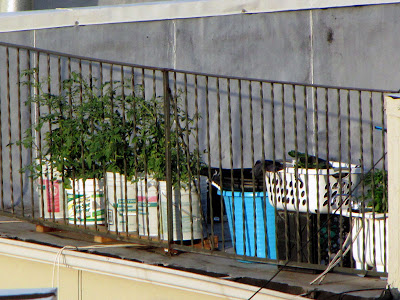 I was able to zoom in on the neighbors' rooftop container garden with my new camera so I've decided to cover their garden progress as well. From what I can see their tomatoes are doing fine. They're a healthy green color, they're flowering and there's no glaring signs of disease. I can't tell what's growing in the other pots, but I like that they re-purposed an old sink and a laundry basket as planters. 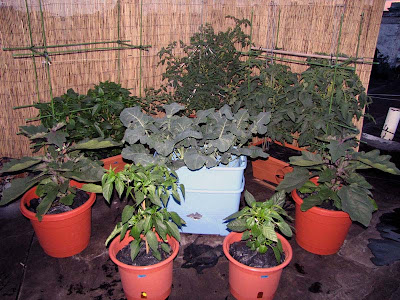 Reading Round Up: Mid June Edition 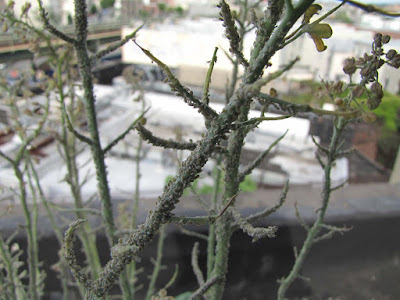 Gourmet magazine writes about Tomato Maniacs. I'm going to plant some of their recommendations next year. Sungold was always in the plan, but I think I'll include Super Bush as well. It sounds well suited to a rooftop environment.

Read about the mother of all rooftop gardens in Greenpoint, Brooklyn.

Interested in starting a vegetable garden, but don't have the time to do it yourself? Hire someone else to do it for you! Getting their gardens home delivered from the Boston Globe, Massachusetts.

Save money on your garden with these tips from the Hartford Courant, Connecticut. I didn't know that some of the plants they mentioned could survive indoors. Saving Some Green: Low-Cost Ways To A Beautiful Garden

The National Gardening Association has an excellent guide to plant pests. For each bug they have a detailed photo, their size, what region of the country they are found in, what plants they can be found on, where on the plant they can be found and finally, how to control them. All in under 200 words or less! Now that I found it this site will be the first place I go to if I want to identify an insect I believe is harming my plants. Check it out. 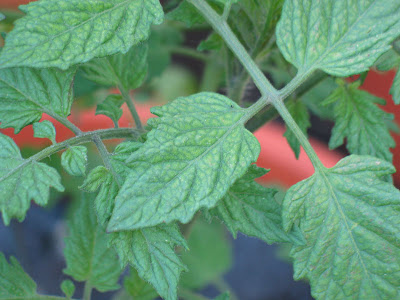 Now that the tomatoes have recovered from their phosphorus deficiency they have moved onto magnesium deficiency. The celebrity tomatoes are fine, it's just the orange paruche cherry that's affected. Purple leaves have been replaced with yellow leaves. From Wikipedia:


Symptoms include, yellowing between leaf veins, which stay green, giving a marbled appearance. This begins with older leaves and spreads to younger growth. Can be confused with virus, or natural aging in the case of tomato plants. Fruits are small and woody.

I found a simple epsom salt recipe online, 2 tablespoons of epsom salt in 1 gallon of water, and applied it to my plant about a week ago. It seems to have done the trick, the yellow is not as pronounced as before, but just to be safe I'll continue to apply the epsom salt solution every 2 weeks. I'm actually quite thankful that this is the problem. For several days I was worried that the plant had a virus and that I wouldn't be able to eat any homegrown cherries this year. They're my 2nd most favorite thing to grow. 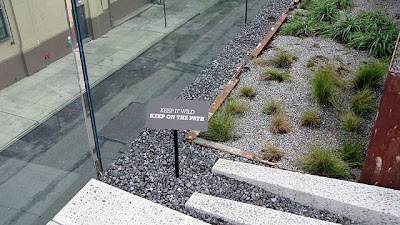 Yesterday, the first section of the High Line opened to the public. For those of you who don't know what I'm referring to here is a short history from the park's website:


The High Line was built in the 1930s, as part of a massive public-private infrastructure project called the West Side Improvement. It lifted freight traffic 30 feet in the air, removing dangerous trains from the streets of Manhattan's largest industrial district. No trains have run on the High Line since 1980. Friends of the High Line, a community-based non-profit group, formed in 1999 when the historic structure was under threat of demolition. Friends of the High Line works in partnership with the City of New York to preserve and maintain the structure as an elevated public park.

I visited it today after work with my new camera. I haven't read the manual yet, but so far I like what I see. The park was great too :)

To see the photos view my High Line Flickr Set.

Reading Round Up: Full Moon Edition 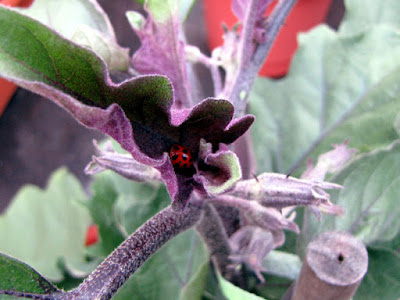 Yours truly was mentioned in the diggin'it blog on CSMonitor.com so I would like to extend a warm welcome to all the Monitor readers who have dropped in. Now on to the links!

Don't have a yard to grow stuff? Borrow somebody else's! Like an eager vine, urban garden sharing spreads its roots from OregonLive.com.

Here's another article on that rooftop gardener from Milwaukee I mentioned in a previous Reading Round Up. This time other rooftop gardeners are mentioned, plus there's a really nice photo slide show.

Lastly, A Fluid Definition of Self-Sufficiency from the New York Times. I wonder how this will turn out. I'm going to have to check it out when they dock. 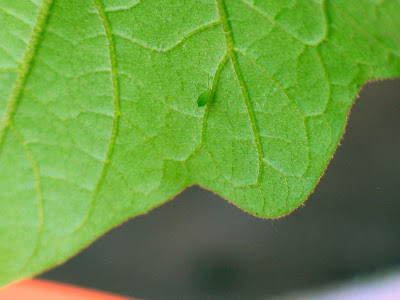 My eggplants had a mild aphid problem so I removed them with a strong blast of water and smooshed the survivors with my fingers.

On a lighter note, I recently noticed some neighbors have started their own rooftop container garden. 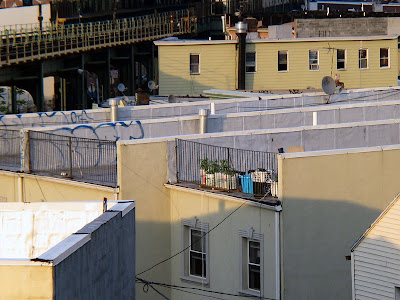 My camera can't zoom in close enough, but I'm pretty sure they're growing tomatoes. They came out soon after I took this pic and I considered yelling out to them to stake their plants, but I decided against it. Lessons are best learned through direct experience, plus I didn't want to come off as crazy.