Not the Kind of Excitement I Was Looking For 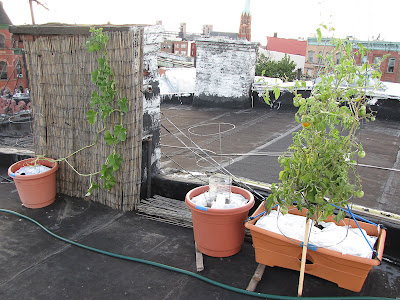 Last Friday's storm tore down a cage from one of the Garden Patch Grow Boxes. Surprisingly, the Yellow Perfection tomato plant survived and only 2 tomatoes were lost in the collapse! The main stem bent, but did not break. The fun isn't over yet though, let's see if it survives Hurricane Irene. 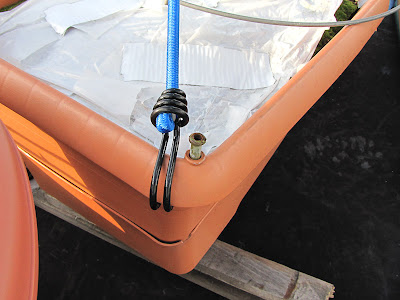 All the pegs that held the cage to the planter broke in half so I can't use the cage next year. Drat. I disassembled the cage, threw away all the broken pieces and kept the rest to use as spare parts for the remaining cage. 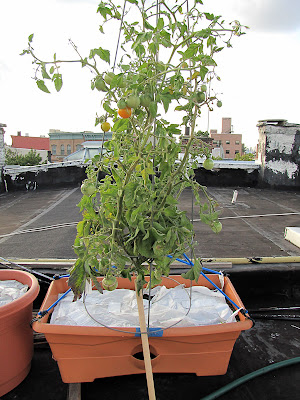 As a temporary replacement I used a circular metal cage held in place with bungee cords and a couple of sticks. I'm glad I had a spare cage available, otherwise the plant would have been cut down. In the future I'm going to make a point of having a several cages available for the unexpected. 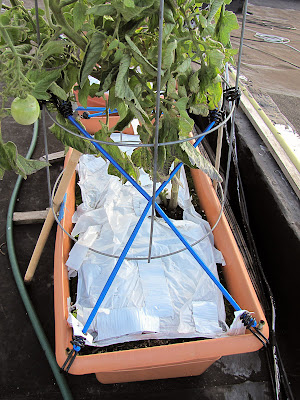 The sticks keep the cage perched on the lip of the planter, otherwise the bungee cords would pull the cage too far forward or backward. All the tension on the cage keeps its pretty stable. The setup survived Sunday's storm, which I think was stronger than Friday's storm, so maybe that's a sign it can last till the end of the season. Of course, now that Hurricane Irene is coming I'm not too confident. 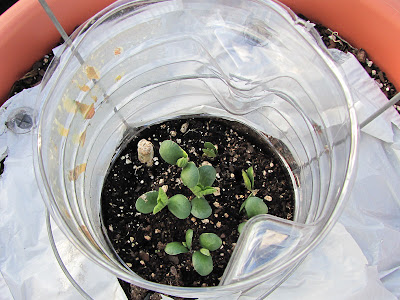 Soybeans have sprouted in the former melon container. I planted them on Thursday and they sprouted on Saturday. I wonder if they'll mature before it gets too cold. 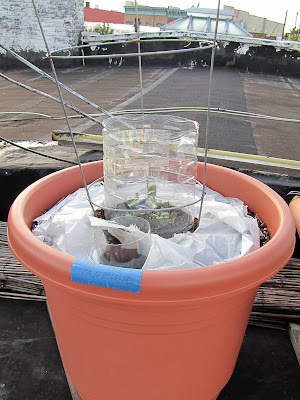 To shelter them from the wind I cut off both ends of a plastic water jug and buried one end about an inch deep in the soil. 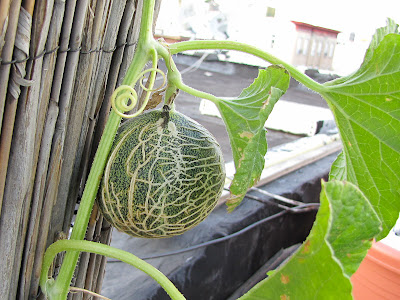 The last melon has stalled at baseball size. As soon as its skin changes I'll remove the plant and sow more soybean seeds. 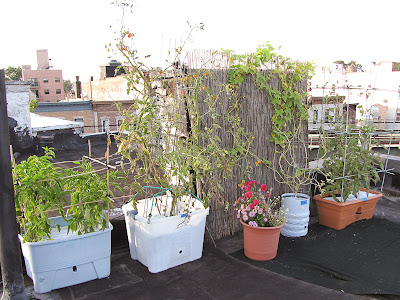 The Sun Gold cherry tomato plant was moved away from the chimney so it could get more afternoon light. 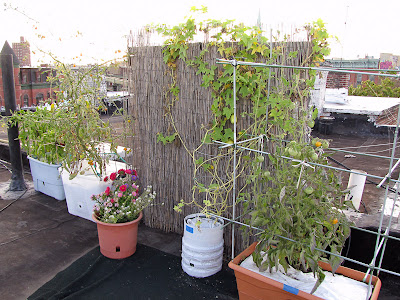 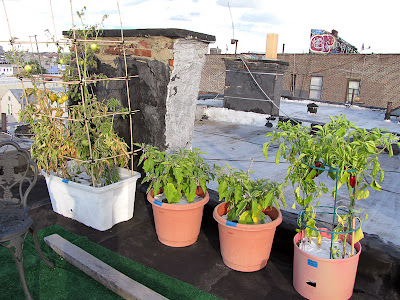 The Atris pepper plants in the Southern Patio container were moved to the other side of the roof, near the eggplants. 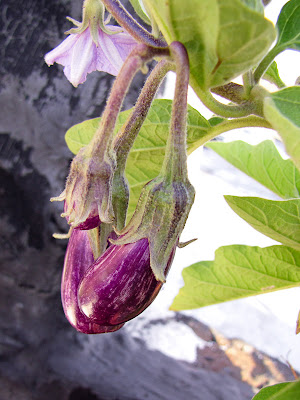 More eggplants on the horizon. 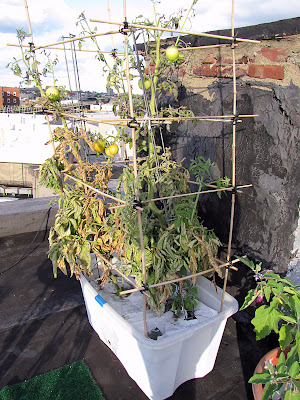 One of the Valencia tomato plants is at death's door, I'm sure the other is not far behind. I've changed my mind about resuming use of the Serenade spray. It's close to the end of the growing season so I'll just let the plants die.

After a lot of hand wringing I decided to pick the majority of green tomatoes off the plants. Only marble sized fruits are left on the vines. I'd rather try ripening them indoors than leave them outside for the hurricane to blow away.

All of these photos were taken on Monday. On Tuesday I realized the hurricane was coming so all the containers were shoved back toward the chimneys and crowded together in the hopes of preventing them from tipping over due to high winds. Unfortunately, by the time I finished it was too dark to take photos and on Wednesday I didn't have time to take more pics so I used these instead, sorry about that.

Looking at these numbers, plus taking into consideration the weather and what's currently growing on the plants, makes me think I won't surpass last year's record of 63 pounds, 11.5 ounces. Hopefully we'll have fantastic September weather and I'll be proven wrong.

If you're in the path of the hurricane are you taking any steps to prepare your garden?